Seriously, people of the past, popcorn ceilings? Some things I can understand, like shag carpeting. It’s not my thing, but I can at least imagine why it was popular at some point. Popcorn ceilings? Appearance aside, after two months, they’re already collecting cobwebs and dust and are horrible to clean, let alone 20 years. And it’s just adding insult to injury that they often contain asbestos. Ugh. END_OF_DOCUMENT_TOKEN_TO_BE_REPLACED

Along with the house (and the yard, and the dilapidated garage, and…) we recently became hot tub owners. Woohoo!

Being newbies in that department, we turned to the best resource for learning new things quickly: YouTube.

Tool Dude Tony told us everything we needed to know! For serious, it’s actually a really helpful video. We wound up getting this pump, which made quick work of emptying the tub, and Dina scrubbed at it for quite a while. 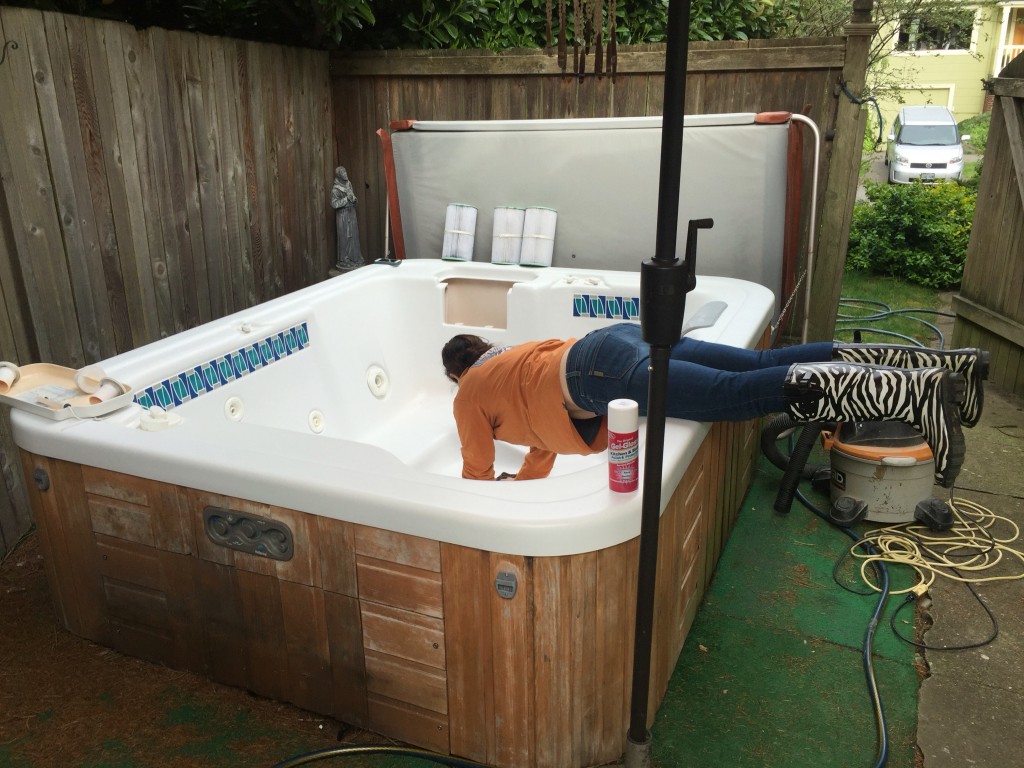 In addition to the tub itself, the filters needed some attention. Believe me, they did not start this color: 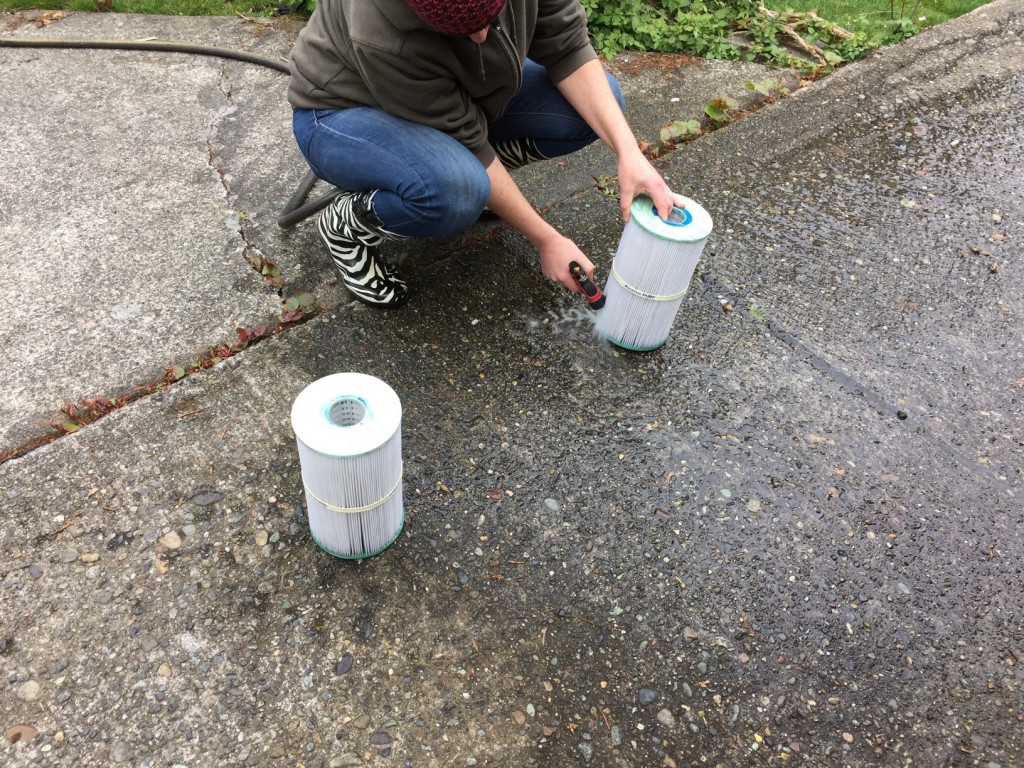 And in the end, it was looking really good. 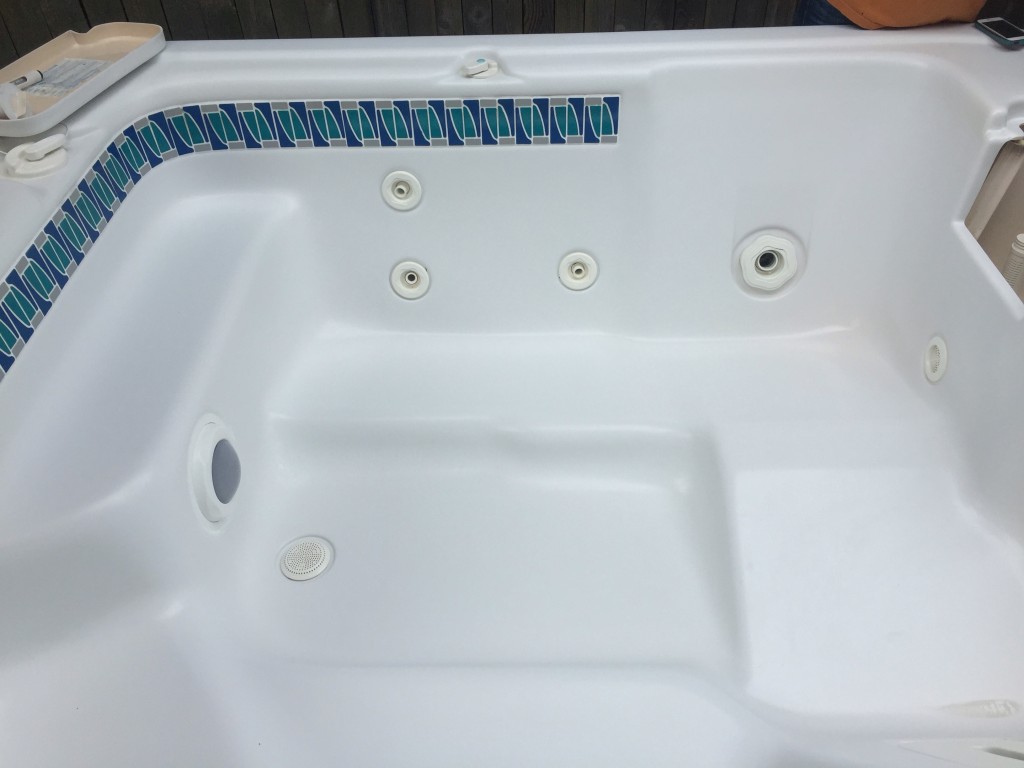 On our way to pick up supplies for another project (asbestos removal, a tale for another post), we stopped in at a pool store in SoDo, and in less than 5 minutes, got the low down on hot tub chemicals. We aren’t experts, but we probably won’t die from bacterial infection either.

We are heading out of town for a bit on our honeymoon tomorrow, and managed to sneak in a soak before our trip â€“ it was glorious!

Wanna save $20-50k on buying a new home in Seattle? Get yourself a sewer inspectionÂ before you make an offer!

In Seattle (and maybe other municipalities, I don’t know), the homeowner is responsible for the sewer system all the way up to where it connects to the sewer main. It’s called your side sewer, and it runs from your home, underground, to the sewer main that’s under the street or in an alley.

It can run underneath your foundation, lawn, sidewalks, driveway and the street itself, and that’s where the potential costs come from. If you have to repair or replace it, the pipe itself is cheap, but tearing up and then rebuilding, say, a section of your street (which is how it goes), can run tens of thousands of dollars.

When we were looking at the house, our real estate agent recommended a sewer inspection, which is performed these days by way of digital camera on the end of a long line â€“ a sewer scope.

Rick DelamareÂ was a consummate proÂ â€“ extremely knowledgeable, friendly, and, lucky for us, very well versed in dealing with the City of Seattle. Other than a few roots starting to poke into the pipe here and there, this was the big issue he found: 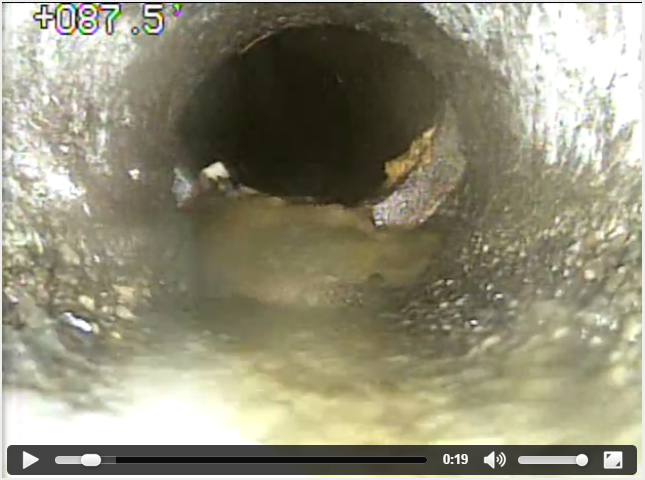 This photo is from a video we got, and it shows our sewer pipe in the foreground and the sewer main in back. The +087.5′ means the scope has traversed 87 and a half feet from of pipe from the point where he hooked in to the system, in this case, 20 or so feet underneath the middle of the street. You can see the pipes are offset â€“ they don’t line up, and it’s right at the junction between the side sewer and the main.

If we hadn’t seen this, we could have had a backup eventually, and we likely would have had to duke it out with the City of Seattle, arguing about who was responsible. But since we had the inspection, we got the city to come out preemptively to do their own inspection, document the problem, and send us a letter acknowledging this issue is their responsibility. (Rick had given it a 95% chance of playing out that way, in his opinion.) So now if there’s a problem down the road, we’ll only have to deal with raw sewage backing up into our house, rather than also fighting over costs with the City of Seattle. Yay?

As we rounded out our first week as homeowners, we ticked a few things off the list.

We made our first run to the dump in the truck (working name: Squeaky), carting off all the carpets we pulled up. (For those wondering, much of it was soaked through with water or worse, so it was not salvageable. We did keep the nicest section around for who knows what.) 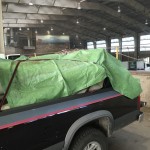 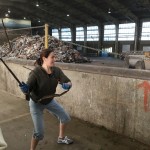 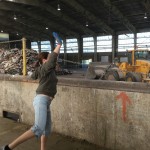 We also got the very large, very heavy woodburning stove insert out of the fireplace, with the help of a couple of friendsÂ â€“ thanks Jared & Carlos! 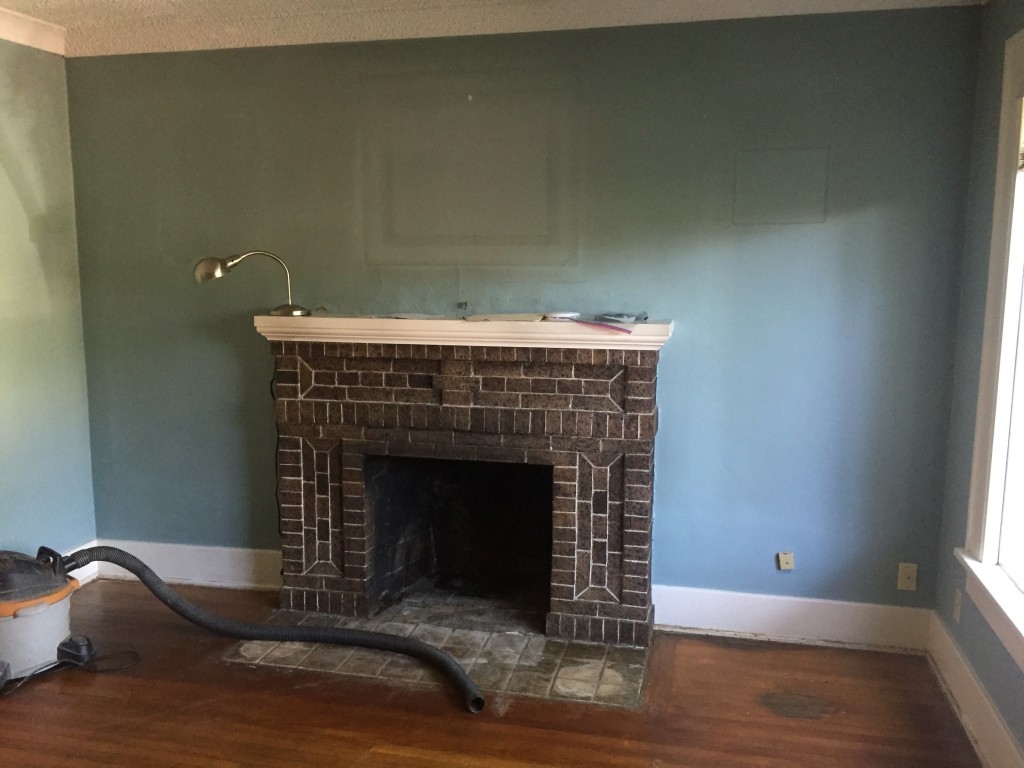 We took a very important picnic break on Saturday, as well, enjoying the first of many meals underneath the apple tree in the sun-dappled backyard. 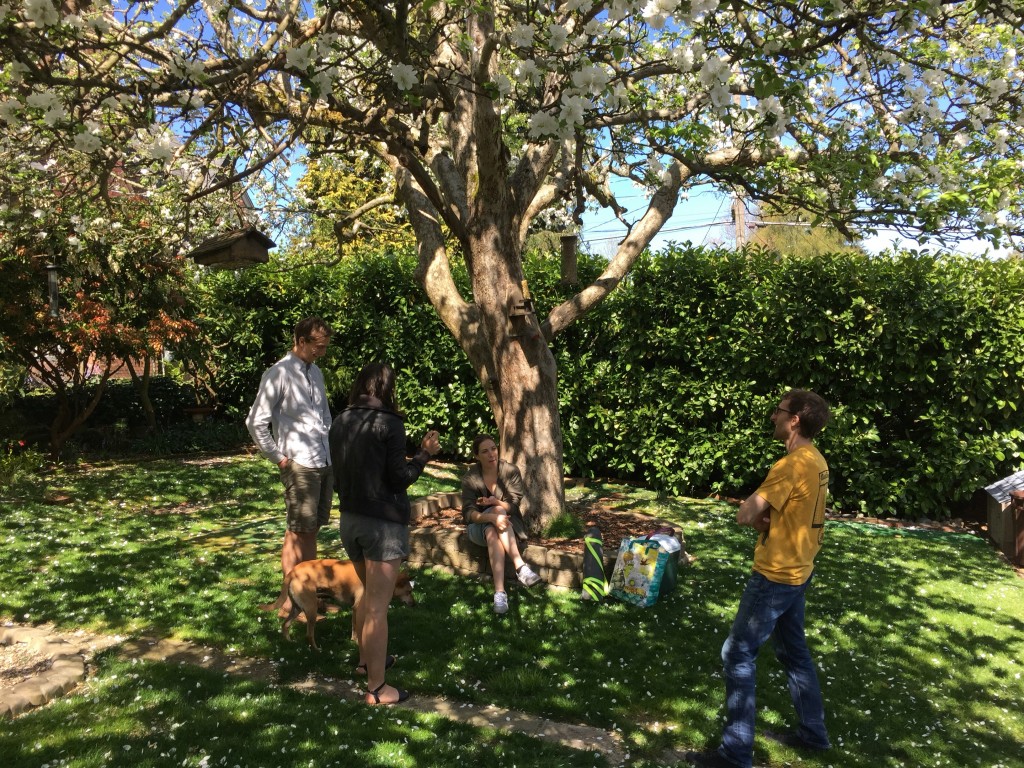 We finished pulling up the carpet tack strips and removing all the staples that held down the pads. Work in the three rooms (living room, dining room, and one bedroom) went pretty quickly, all things considered, and all that’s left to prepare for sanding the floors is to pry off the quarter-round molding in a couple of the rooms. It’s painted on (as well as nailed), so I’m sure it’ll be a little tricky, but hopefully not too bad.

Lastly, we pulled out a built-in shelf in the hallway on the main floor. It was installed with a little bit of everything â€“ screws, nails, paint, glue, and I don’t know what else â€“ so many tools were used, and we managed to only pull a little plaster off the wall. 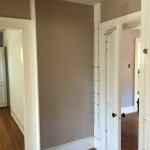 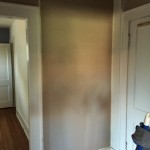 The previous owners of our house deferred quite a bit of maintenance inside the home (to put it generously), but they put aÂ ton of energy, love and no small amount of money into maintaining the yard. It’s a sight to behold, particularly the huge old apple tree: 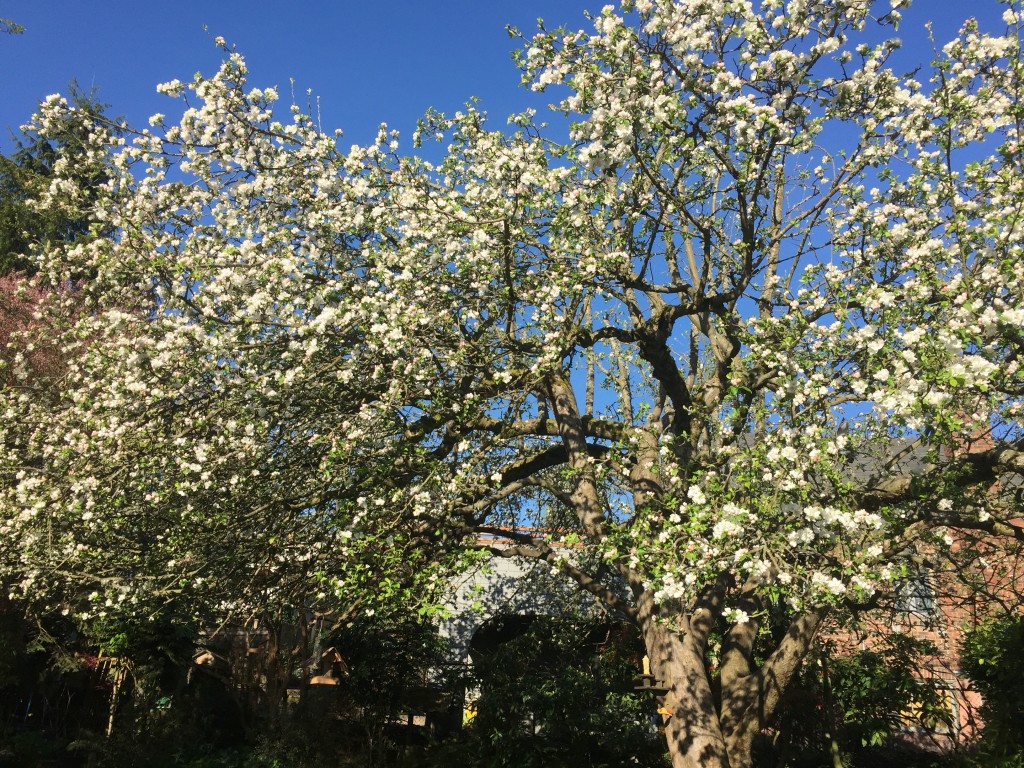 It’s 30 feet tall, I’d guess, and the canopy spans most of the width of the yard, 40 or 50 feet.Â We knew it was a greatÂ treeÂ before we put in our offer, but it hadn’tÂ exploded into bloom yet. It’s far and away the bestÂ looking thing on the property!

WeÂ learned there’sÂ a ton more in the yard, too: a peach tree, a plum tree, a fig tree, a bunch of blueberry bushes, a raspberry patch, and some Concord grape vines, all of which bear fruit. Plus a little starter garden with herbs and some lettuce that’s already happily growing.

The front halfÂ of things was a little more bare when we saw it originally, but now that spring has arrived, the street side of the house is pretty well covered up. 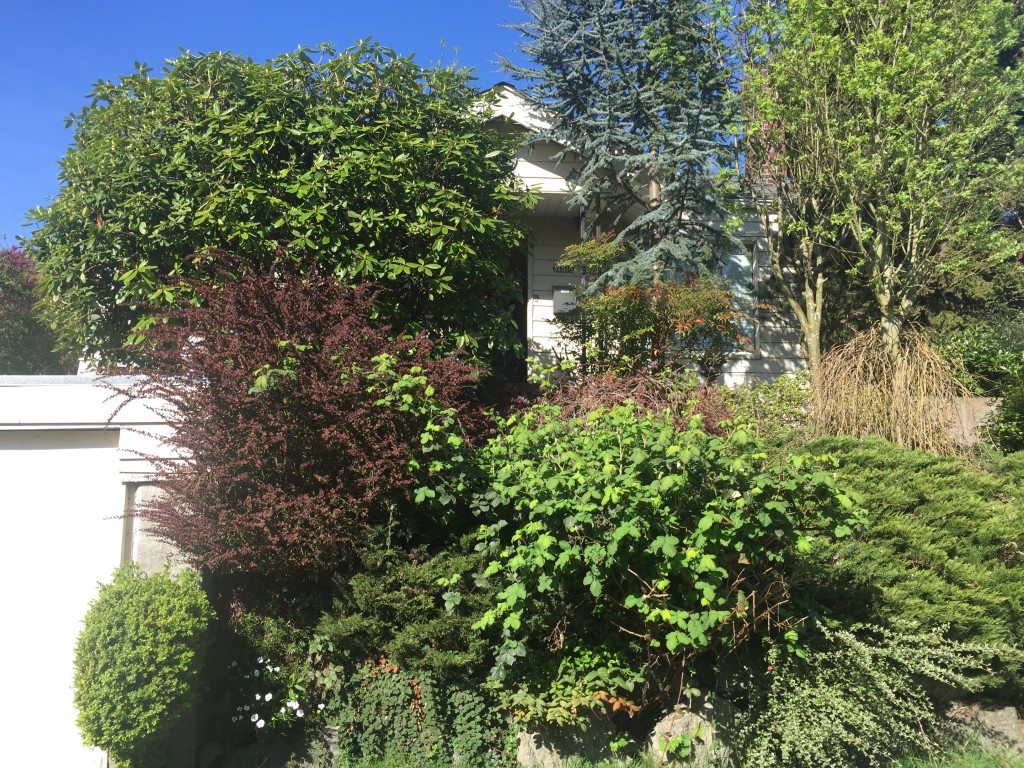 We’ll have to formulate some kind of a plan to clean that part of the landscape upÂ eventually. For starters, though,Â Dina bought me an awesome folding saw for my birthday, and I put it to good useÂ today, cuttingÂ all of that blackberry bush out, filling up our yard waste cart. (For those who live elsewhere: this species ofÂ blackberry isÂ an invasive species in Seattle, and for all intents and purposes is aÂ weed. It grows everywhere and anywhere, and it’s thorny as all get-out.) I also managed to resurrect the lawn mower that the former owner’s left behind, so weÂ are no longer front runners for ugliest front lawn on the block. Progress.

We receivedÂ keys to the new house late Monday, and got in there first thing Tuesday morning, or so we thought. We actually arrive aboutÂ 2 hoursÂ after the cleaning crew that our wonderful realtor had hired on our behalf. They were well into things, and had a loooong way to go.Â Have we mentioned that this house needs some love?

After a marathon performance by the cleaners, Dina & IÂ returned and put in some very rewardingÂ work pulling up carpets. We knew there were hardwoods underneath, but it didn’t make the reveal any less fun.Â Before: 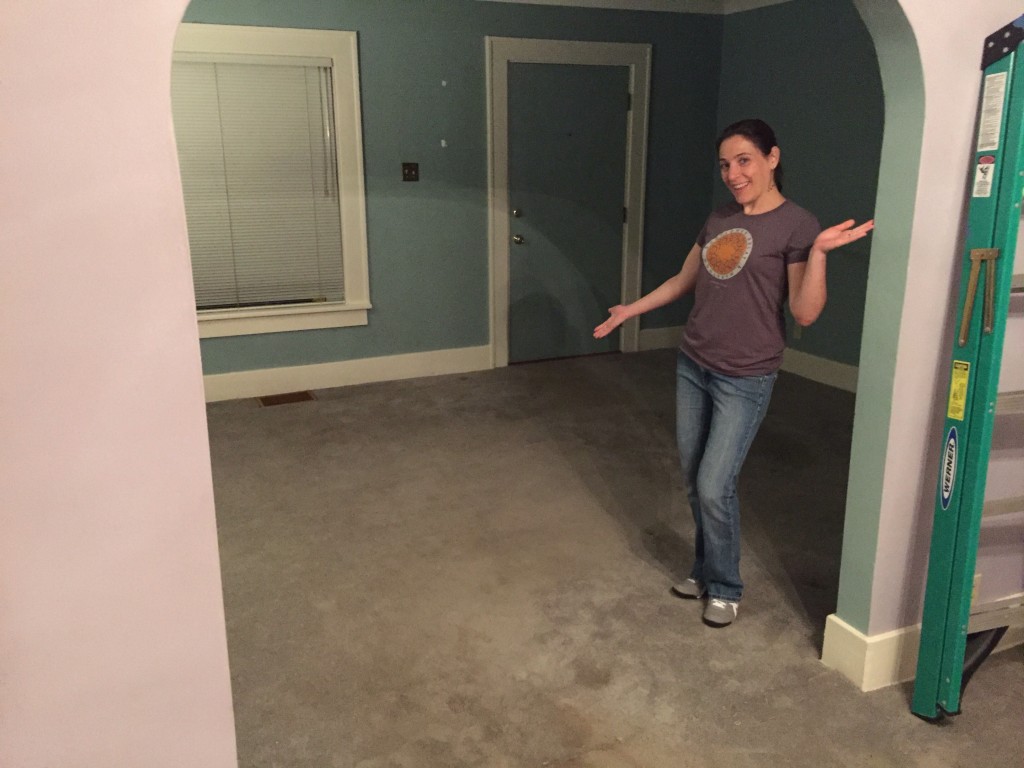 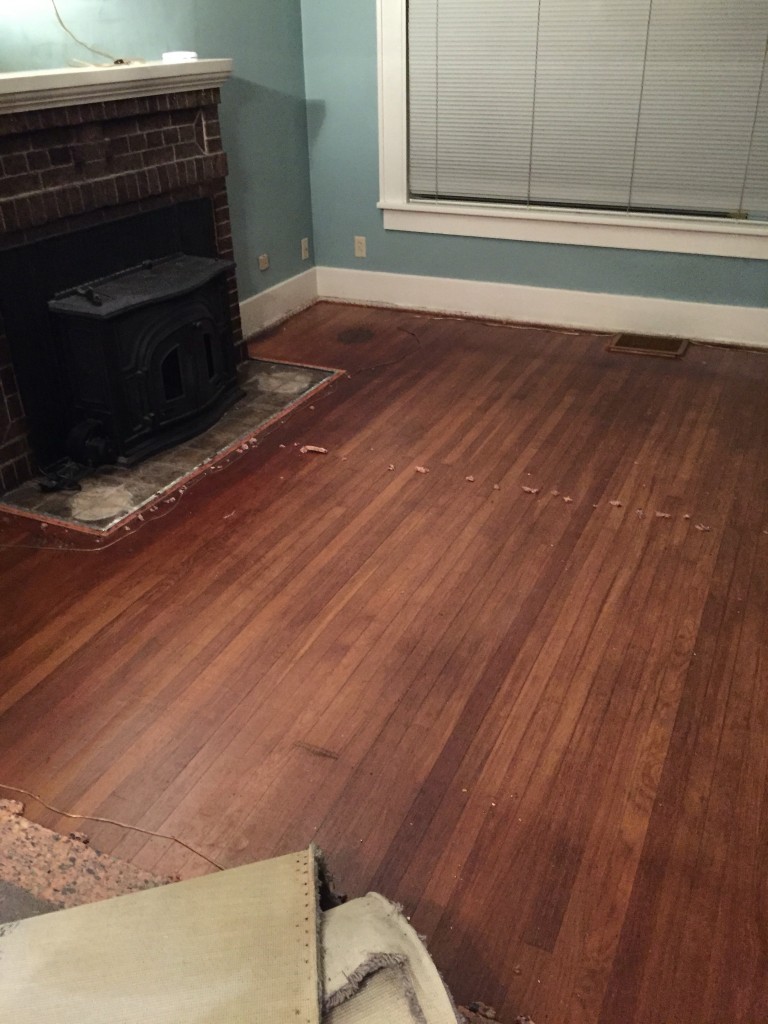 Pretty good! We now have a whole lot of carpet tack strips and staples to pull up, but it’s satisfying and goes pretty quick. Our weapon of choice for the tack strips: 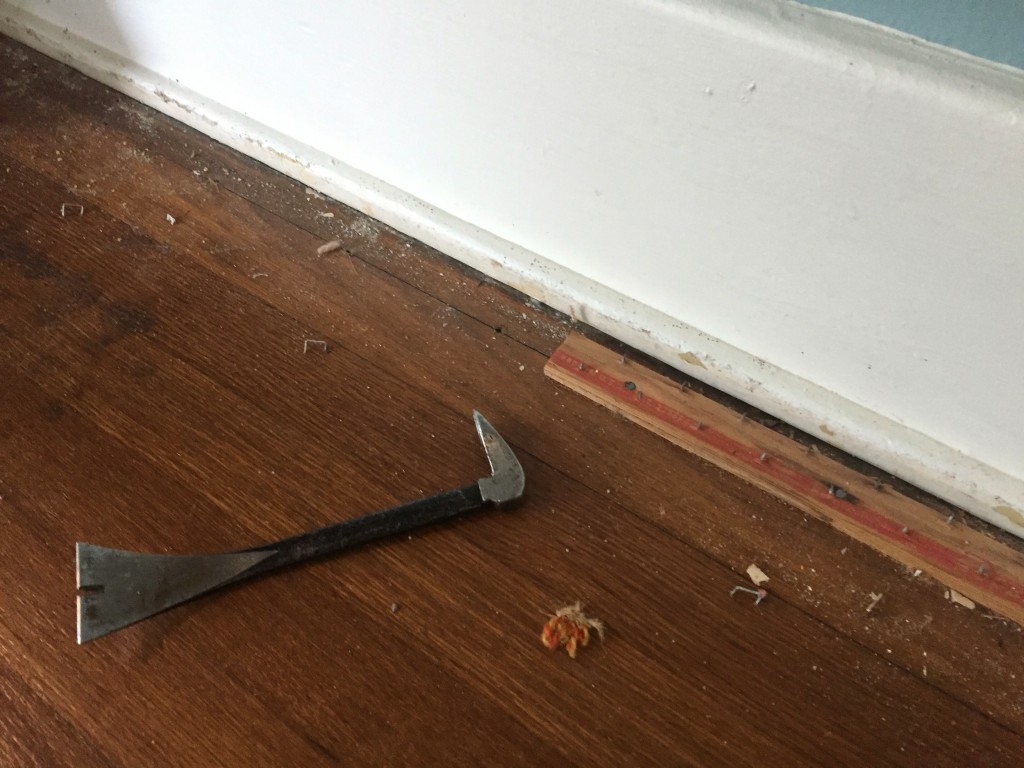 And a needle-nosed pliers works perfectly for the staples. One room down, three and a half (hallway)Â more to go!

Today is when we officially become homeowners! After just a little last-minute scrambling, we got a cashier’s check to the escrow and title company on Friday, and signed a giant stack of paperwork on Saturday. We’re told it’ll all get filed at the courthouse today. We’ll get the keys tonight and start pulling up carpets tomorrow!

We also took a trip on Saturday to get the truck’s emissions tested (a prerequisite to registration in King County). Given its propensity to spew a nice puff of smoke whenever it starts up, we were dubious, and the cheerful gentleman running the test station gave us absolutely no hints about the outcome until he handed us a piece of paper: pass!

The only other concern about the truck is the near constant squeakingÂ that I think I’ve identified as the bearings in the air/smog pump. A new partÂ is on its way, and hopefully we’ll be in business.